This wiki has been migrated to https://gitlab.com/wireshark/wireshark/-/wikis/home and is now deprecated. Please use that site instead.

The official description of ZRTP is 'Media Path Key Agreement for Secure RTP'. It's a protocol to exchange and verify end-to-end encryption keys for voice communications.

ZRTP is being developed by Philip Zimmermann (Mr. PGP), Alan Johnston and Jon Callas as alternative to the various encryption signaling protocols with specifically the End-to-End argument in mind. 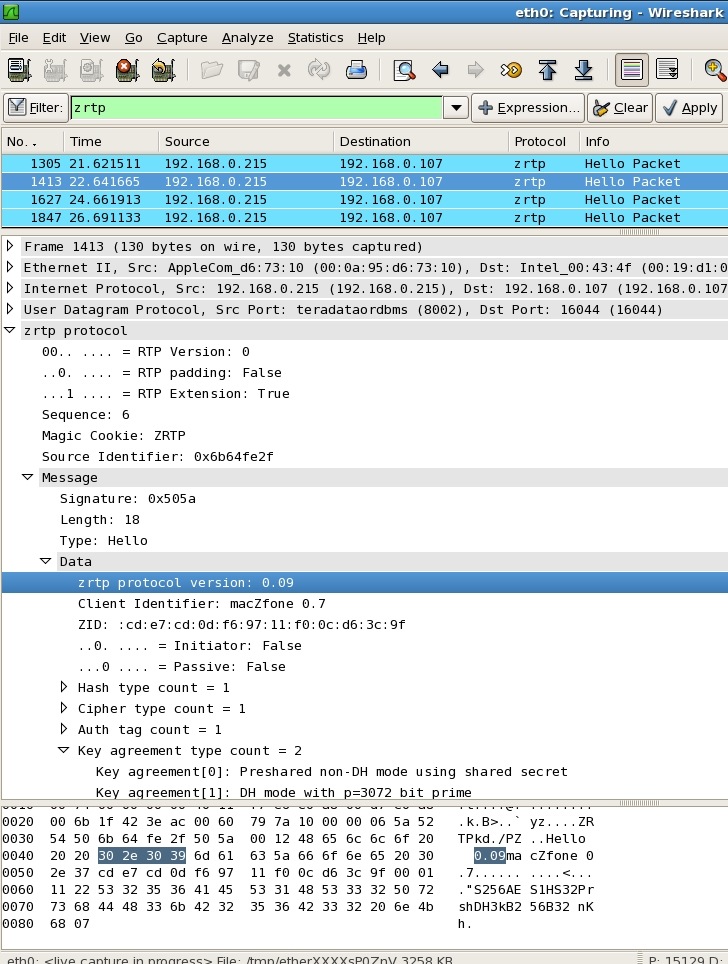 If you want to use Wireshark to capture Zfone encrypted VoIP traffic on the same machine that Zfone is running on, you cannot do it on Windows. This is because on Windows, the Zfone device driver is closer to the network adapter than the WinPcap device driver. This means Wireshark - and other applications using WinPcap - capture only unencrypted IP traffic. Zfone has already decrypted incoming packets before Wireshark can see them, and Zfone only encrypts outgoing packets after they have been forwarded to Wireshark. This problem only exists on Windows.

If you need to capture encrypted packets from a Windows machine running Zfone, you must run Wireshark on a separate machine between the two parties.

You cannot directly filter ZRTP protocols while capturing. However, if you know the UDP port used (see above), you can filter on that one.