WakeOnLAN is the protocol name given to the so-called Magic Packet technology, developed by AMD and Hewlett Packard for remotely waking up a remote host that may have been automatically powered-down because of its power management features. Although power management allows companies and individuals to cut power usage costs, it presents a problem for IT departments especially in being able to quickly and efficiently remotely manage PC's, especially during off-hours operation when those PC's are most likely to be in a suspended or standby state, assuming power management features are enabled.

For a history of WakeOnLAN and Magic Packet technology, refer to either this wikipedia article, or read this AMD white paper.

A physical WakeOnLAN (Magic Packet) will look like this:

The Synchronization Stream is defined as 6 bytes of FFh.

The Target MAC block contains 16 duplications of the IEEE address of the target, with no breaks or interruptions.

Here is a screenshot of some WakeOnLAN traffic: 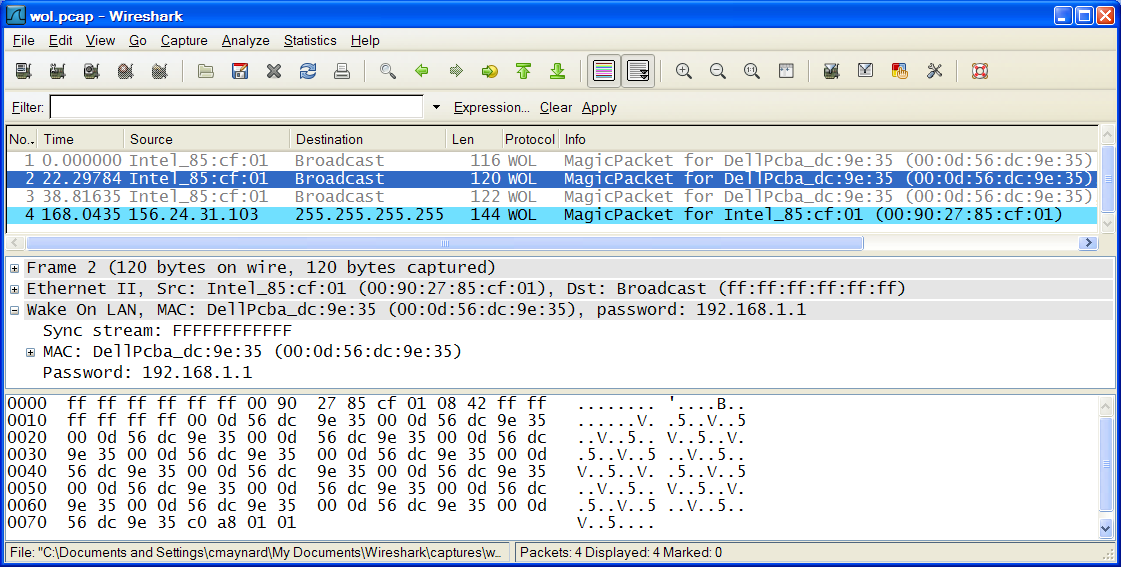 Currently, there are no preferences for the WOL dissector; however, in some cases you may need to ensure that the UDP "Try heuristic sub-dissectors first" preference is enabled in order for WOL dissection to work. When enabling this UDP preference, keep in mind that heuristics are not fool-proof, so it's possible that enabling it could adversely affect dissection of other protocols. Enable it with caution.

Example: Show only the WOL based traffic:

As WOL is currently implemented, you can use the following capture filter to be reasonably assured of capturing most WOL traffic; however, to guarantee all WOL traffic is captured, at least as far as the dissector is concerned, you should omit the "port 9" qualifier in the capture filter expression: