SNMP is used to monitor and manage devices on networks.

For an overview on SNMP, read this http://en.wikipedia.org/wiki/Simple_Network_Management_Protocol
Next tackle The Simple Times newsletters which include articles from the RFC authors and Dr. SNMP.

Typically, SNMP uses UDP as its transport protocol. The well known UDP ports for SNMP traffic are 161 (SNMP) and 162 (SNMPTRAP). It can also run over TCP, Ethernet, IPX, and other protocols. ATM uses SNMP as its ILMI (Integrated Local Management Interface) protocol.

If built with the libsmi libraries, Wireshark uses those libraries to resolve numeric OIDs (e.g. 1.3.6.1.2.1.2.2.1.6.1) into human readable format (e.g. IF-MIB::ifPhysAddress.1). The default installation only contains some common MIB files so Wireshark won't be able to resolve all possible OIDs.

You can configure which MIB files are loaded by using the preference setting mentioned below.

When specifying the MIB modules to load, use a colon separator. Note that the MIB module name is not necessarily the name of the file itself. The MIB name to use may be discovered by looking for the DEFINITIONS keyword in the MIB file.

For Windows, the binaries available from the Wireshark Web site are built with the libsmi libraries. The MIB files are stored e.g. in C:\Program Files\Wireshark\snmp\mibs.

In versions of Wireshark built with libsmi, in the the "Preferences" dialog opened by the "Edit ==> Preferences" menu item, under the topic "Name resolution", you will find a checkbox "Enable OID resolution" and also a button "SMI (MIB amd PIB) Modules" which opens an editing window where you can add/remove modules. The name of the file you add to the "mibs" directory mentioned above must be the same as the module name itself (found in the MIB itself at the start, just before "DEFINITIONS ::=BEGIN").

It is best to download MIB definition (ASN.1) files directly from the vendor/author of the SNMP agent.
Many network-related MIBs definitions can be downloaded from http://www.mibdepot.com.
Verify that the download matches the software running on the SNMP agent.

Which MIB's do I need?

If you see any unresolved OID's you may need to add a MIB file to the Net-SNMP libs.

The following will give an example to add the missing information to display SampleCaptures/b6300a.cap correctly.

What's missing now is the enterprise with the id 253. The IANA Private Enterprise Numbers list tells us that this is Xerox.

Get hold of the Xerox MIBs from one of the links above and place them in the mibs directory (you need the printer-MIB as well) and change the file ending from .mib to .txt. 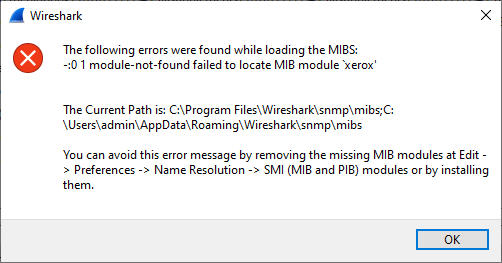 MIB definition loading (and error logging) is done in oids.c.

On Windows: See Printing to a console to enable the Gui console. (printf to Gui console not working - come back and document steps after code working)

Wireshark's SNMP protocol preferences let you control the display of the OID in the Info column, desegmentation of SNMP over TCP, and which MIB modules to load (see above).

The USMuserTable file preference allows the user to choose a file with the engine-ids, usernames and passwords in order to allow decryption of encrypted packets. The file is formatted as follows:

Please note: the order of the parameters in the file will vary, depending on your version of wireshark! If the sample below doesn't work for you, go into WireShark -> Edit -> Preferences -> Protocols -> SNMP, and add the settings through the GUI; afterwards, look at the created snmp_users file to determine the order of the columns.

Recent versions of Wireshark seem to use the following format for SNMP decryption (~/.wireshark/snmp_users)

An example of encrypted SNMP PDUs can be found at the SNMP section of the example captures page.

The following example seems to be outdated (fix me, I don't want to delete it in case it offers value to someone).

SampleCaptures/b6300a.cap A bunch of GETs and RESPONSEs

Show only the SNMP based traffic:

You cannot directly filter SNMP protocols while capturing. However, if you know the UDP ports used (see above), you can filter on that ones.

SGMP (an ancestor of SNMP):

Is there an easy way to find out, which MIB is really needed? From the example above: do I need all Xerox MIBs? Is there an online resource to find a map between the OID and the MIB? http://www.mibdepot.com can help on this

After years thinking and reading RFCs and various other documents, today, I finally understood. "Simple" refers to "Network" not to "Management Protocol"! So it is a Management Protocol for Simple Networks not a Simple Protocol for Management of Networks… That explains why it's called "Simple". It was that Simple but it took me years to understand it! – LuisOntanon