Note, the message body of gRPC is usually serialized in Protobuf format. So please also refer to Protobuf page for the change log of Protobuf dissector.

The pattern format used by 'grpc_message_type' table has two levels:

An example about using gRPC dissector

We use an example to show how to use the gRPC dissector. This example relies on the example Protobuf page. It defines a gRPC service that supports querying user information based on user names.

Following is an example of *.proto file, named person_search_service.proto, which relies on the addressbook.proto file defined in the example of Protobuf page:

We put the person_search_service.proto file in the directory where the addressbook.proto is located (d:/protos/my_proto_files according to the example of Protobuf page).

You should add the d:/protos/protobuf-3.4.1/include/ and d:/protos/my_proto_files paths into 'Protobuf Search Paths' table at the Protobuf protocol preferences according to the example of Protobuf page:

There are two gRPC sample capture files grpc_person_search_protobuf_with_image.pcapng and grpc_person_search_json_with_image.pcapng on the SampleCaptures page. The difference between the two captures is that the former is encoded in protobuf, and the latter is encoded in JSON. To decode them as gRPC, you must decode the traffic on TCP port 50051 and 50052 as HTTP2 like:

This is a screenshot of the gRPC service request message of grpc_person_search_protobuf_with_image.pcapng: 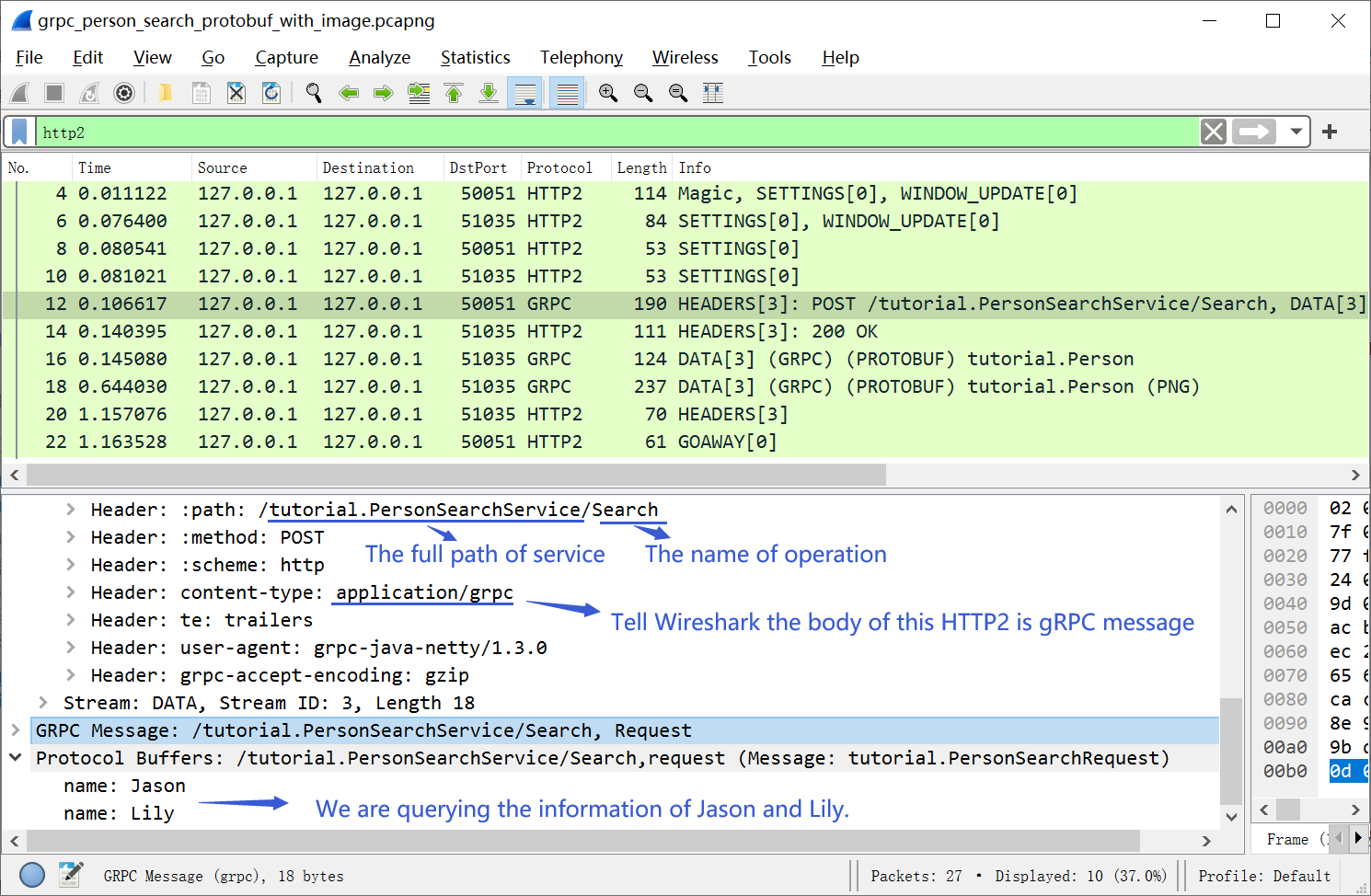 That shows searching for the Person objects of Jason and Lily based on their names.

Since the Search operation is defined as the server streaming RPC mode, the Person objects can be return back to client one after another: 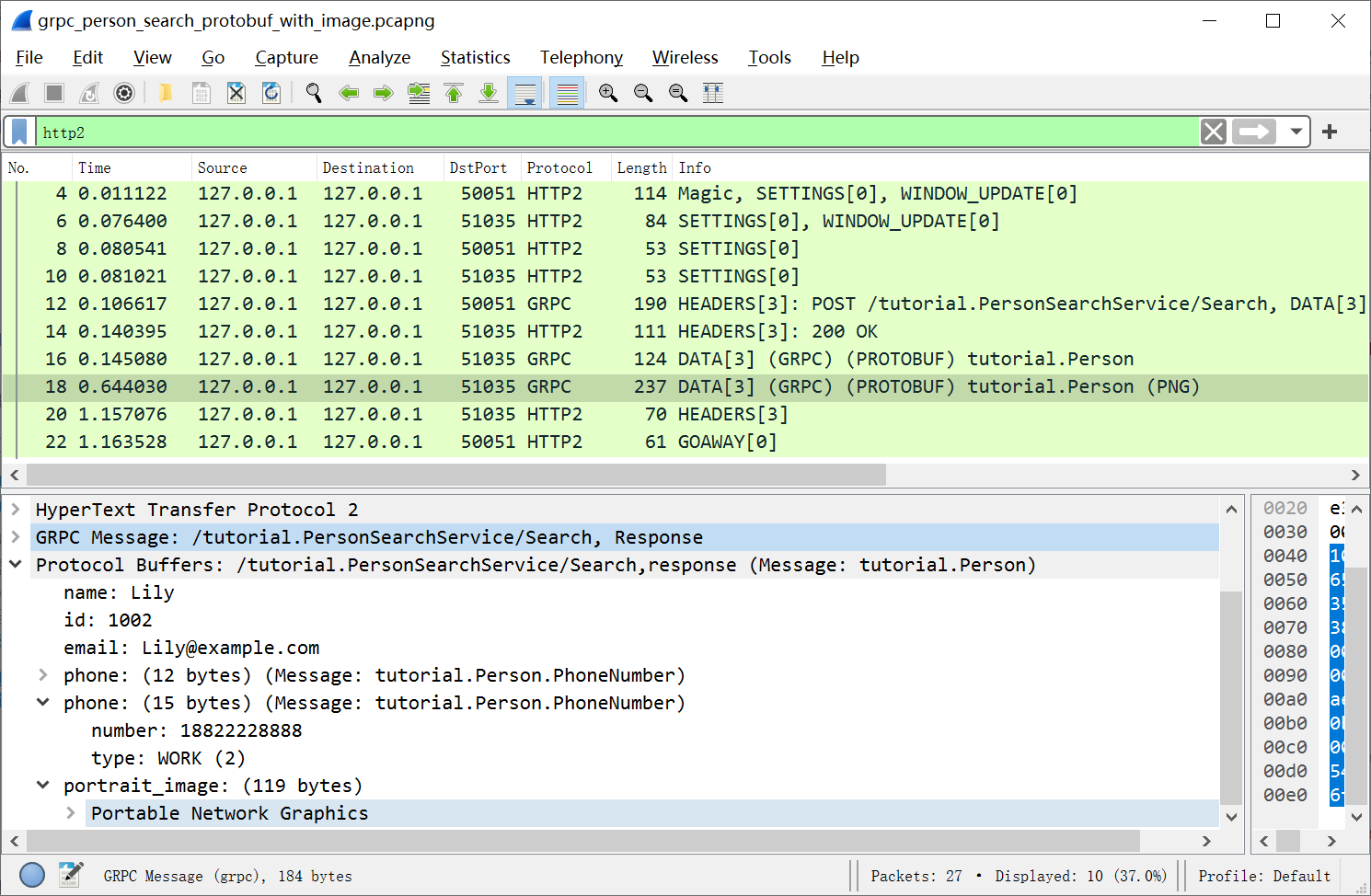 Following is a screenshot of grpc_person_search_json_with_image.pcapng, which encodes gRPC message with JSON: 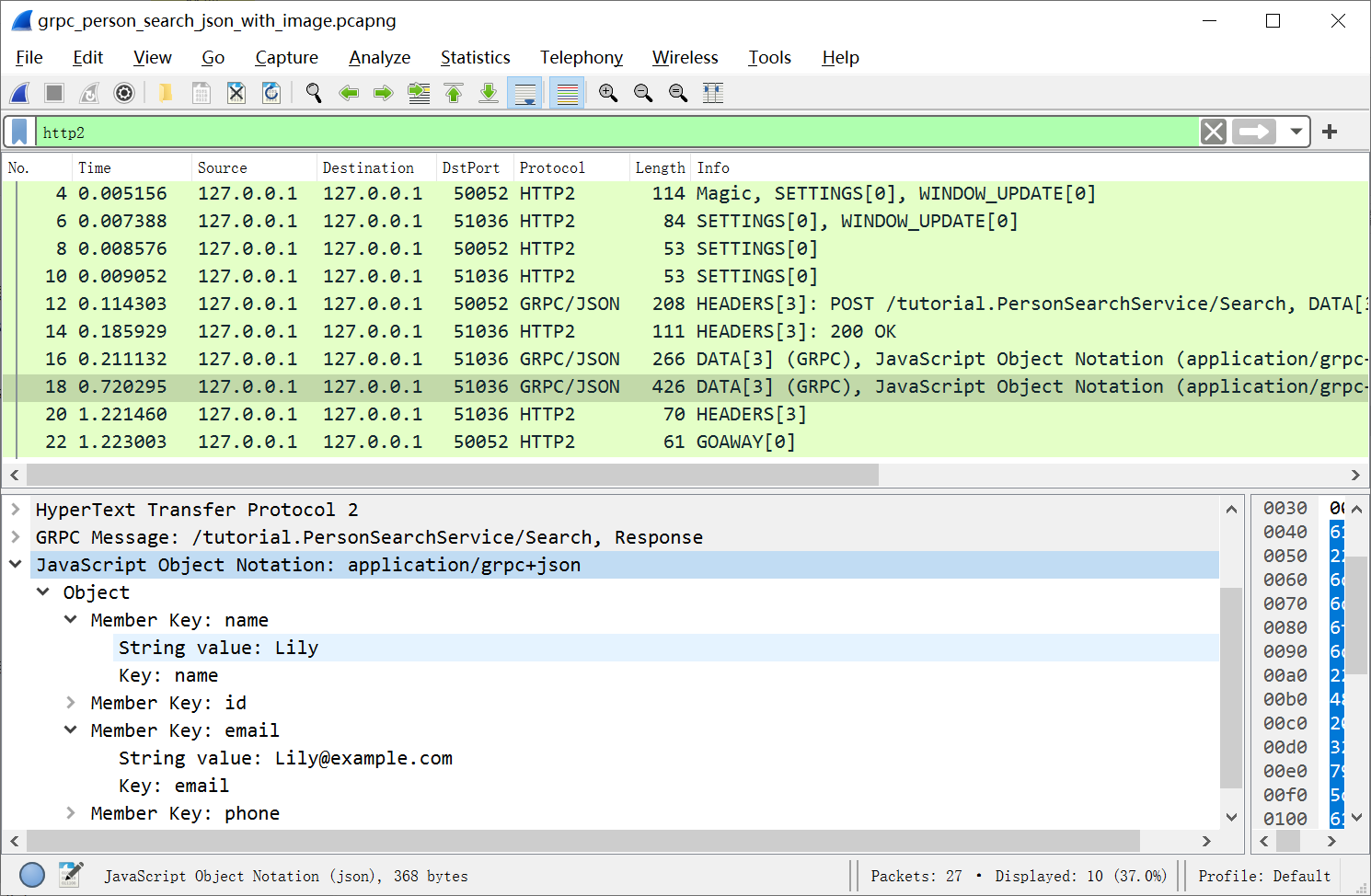 If the gRPC message body is Protobuf data, then you can register your subdissectors in "protobuf_field" dissector table for parsing the value of the field of bytes or string type. Please refer to Protobuf page for details.

The main preferences of gRPC includes:

Note that the old Turn on streaming reassembly mode option is always turned on now.

You should also refer to some preferences of Protobuf:

How to Parse an Incomplete Long-lived gRPC Stream Capture File

HTTP2 support long-lived stream like gRPC streaming call that allows sending many request or response messages in one HTTP2 stream. In the past, if we started capturing after the long-lived stream was established, the subsequently captured DATA frames would not be able to parsed because of losing the header information in initial HEADERS frame.

Here is an incomplete capture file grpc_person_search_protobuf_with_image-missing_headers.pcapng (which is part of grpc_person_search_protobuf_with_image.pcapng in fact). It cannot be parsed because the ":path" and "content-type" header in the request (to server) direction of the stream[3], and "content-type" header in response (from server) direction of the stream[3] are missing.

Here are packets list of the above capture file: 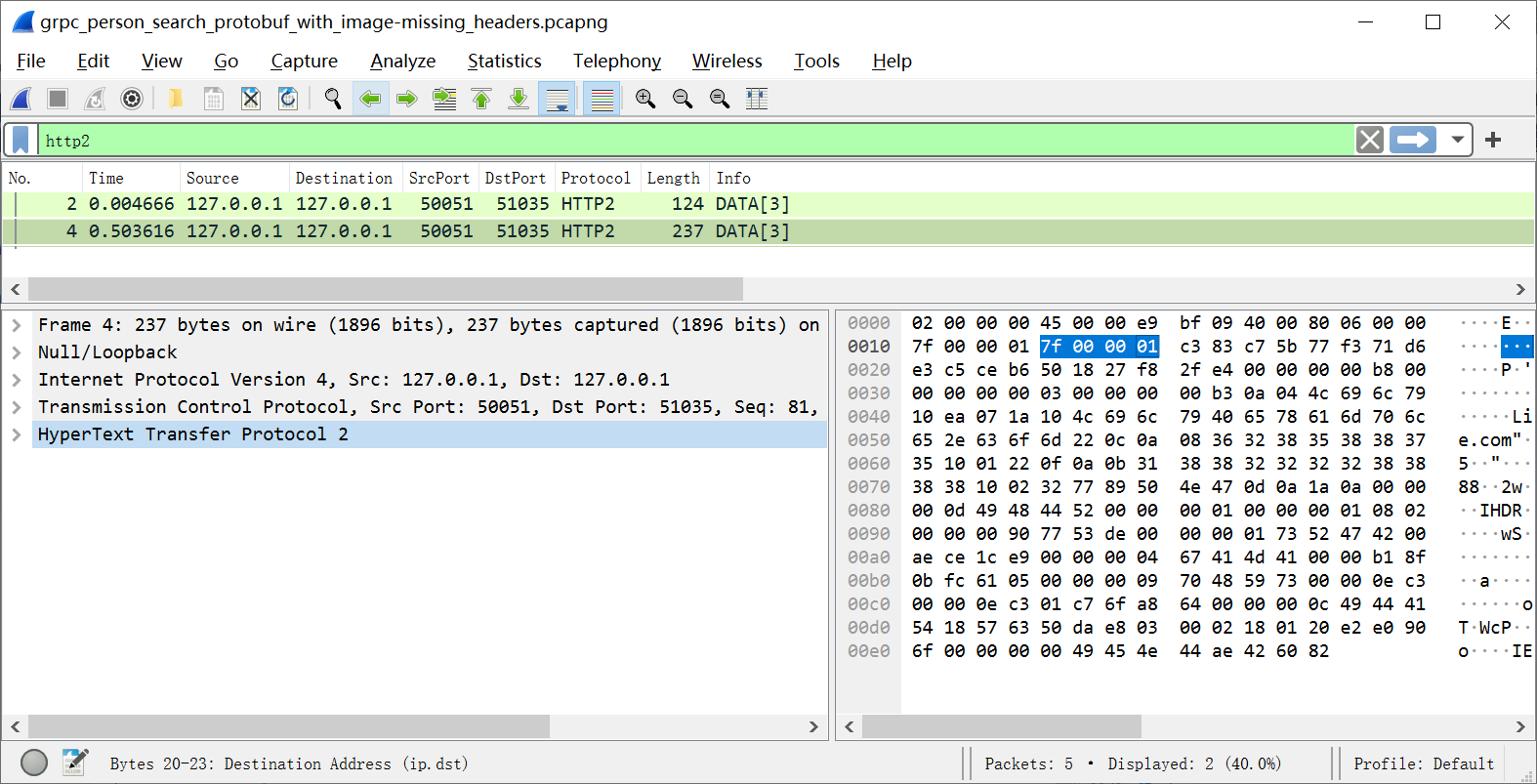 We can configure http2 fake headers UAT in http2 preference:

The DATAs will be parsed as GRPC correctly: 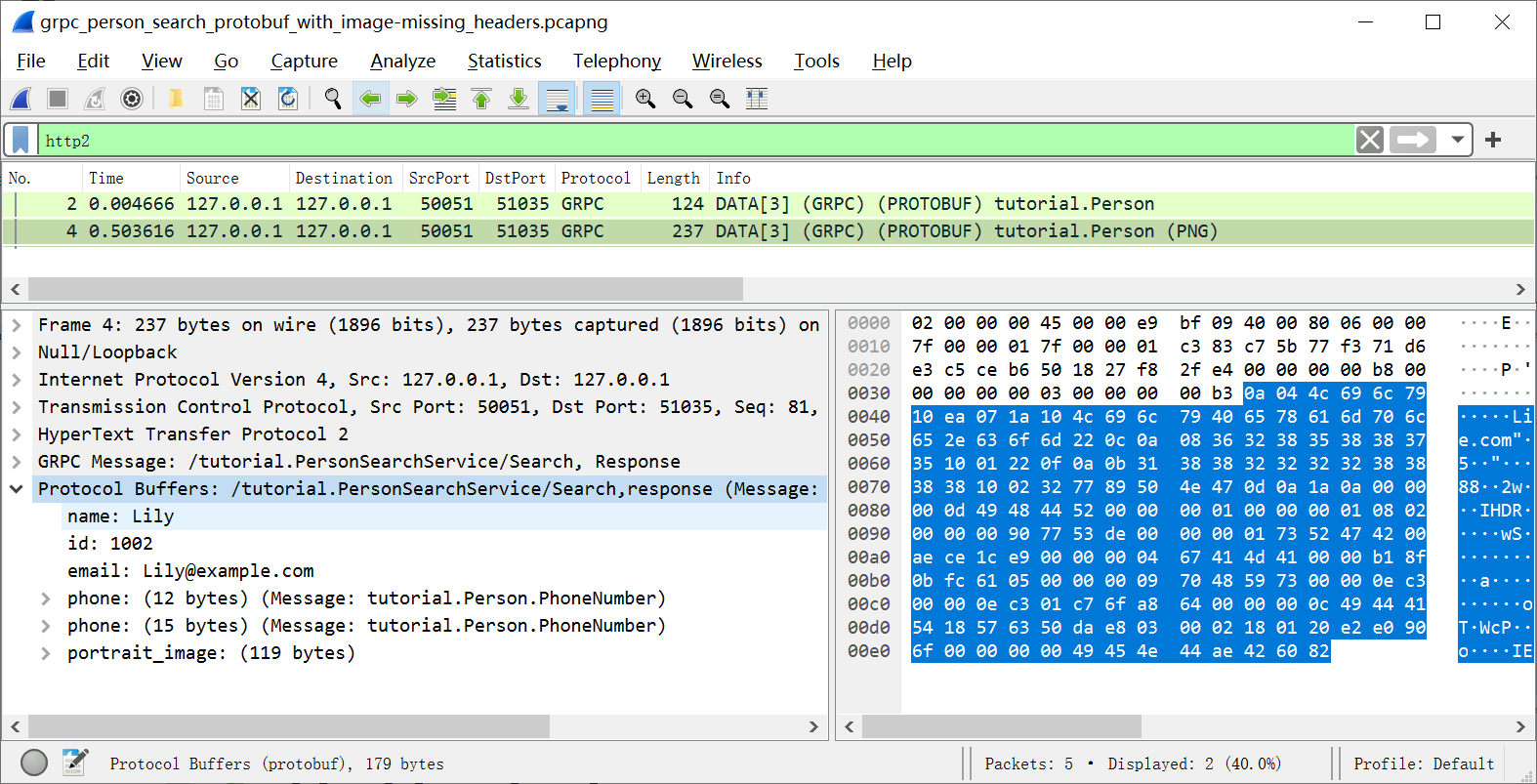 The fields of http2_fake_headers uat are:

How to Export TLS Master keys of gRPC

The capture files that sending gRPC messages in plaintext mode can be parsed by Wireshark directly. If your gRPC connection is secured over TLS, please refer to this page for how to export the TLS master key of gRPC in some languages.