To quote the TightVNC page: "With TightVNC, you can see the desktop of a remote machine and control it with your local mouse and keyboard, just like you would do it sitting in the front of that computer." There are other similar technologies like the X11 protocol, Laplink, …

The real advantage of VNC is that it's implemented on multiple platforms. It's even possible to control the desktop of a Sun workstation by a WinCE PDA!

The disadvantage of VNC, compared against other similar technologies, that it's sometimes a bit slower and that it doesn't allow files to be transferred.

VNC was developed by Olivetti Research Ltd / AT\&T Labs Cambridge which made it available to the public in 1998. In 2002 they've founded a company called RealVNC which is doing further work on it. As the protocol itself is open, there are some other implementations around now: TightVNC, [email protected], … 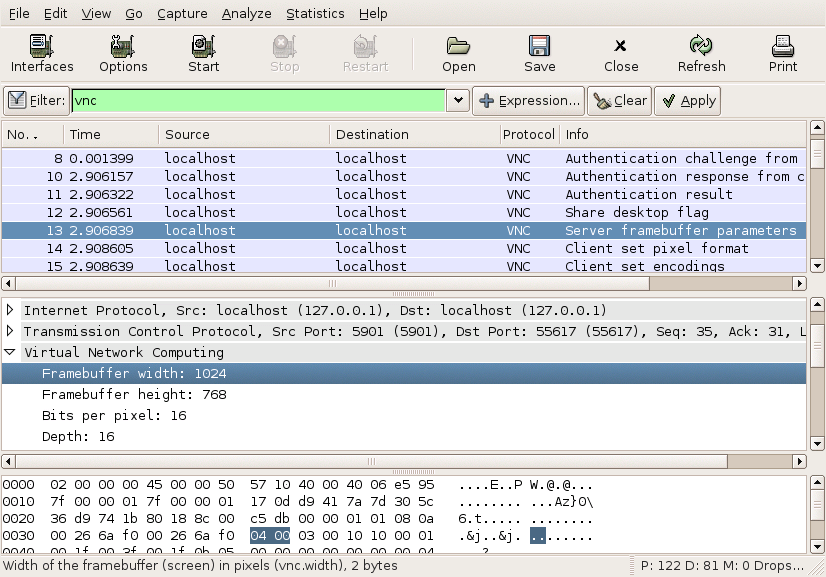 The VNC dissector is almost entirely functional for the RealVNC protocol, lacking only the ability to dissect some ZRLE subencoding messages.

Show only the VNC based traffic:

You cannot directly filter VNC protocols while capturing. However, if you know the TCP port used (see above), you can filter on that one.