These settings affect not only NFS but all other NFS-related protocols that use NFS filehandles, such as NFS-ACL, MOUNT, NLM, KLM.

This field will only be displayed if the actual name of the filehandle is known. If there were no matching LOOKUP, CREATE, etc that wireshark could learn the mapping from, then it will not be displayed.

In addition to snooping filehandles, Wireshark can also attempt to keep track of the full pathname of the actual file. This only works if ALL filehandles, from the initial MOUNT filehandle throughout all the subdirectories down to the actual file were learnt by Wireshark.
In the example below, since we had the original MOUNT call in the trace as well as LOOKUP calls telling us the name of all the subdirectories in the path, Wireshark here adds the field 'Full Name: 139.25.22.102:/home/girlich/export/b' to the dissection of the filehandle.
This field can also be filtered on using the display filter name

Keep in mind, this field is only present in the dissection if the full path of the file is known.

This final and third option tells Wireshark to maintain state between Requests and Responses for NFS and related protocols regarding filehandles. This is to allow more advanced/useful filtering of NFS packets.
If you are experienced with NFS you might have seen that the filehandle for a specific file is only really present in one of the packets of a request/response pair. The filehandle only occurs in either the request or the response but not in both of them.
Thus when we filter for

we would only really see the packets containing the actual filehandle. This is usually not really that helpful, what we want most of the time is to see BOTH the request and also the response for all such calls operating on that filehandle.
When this option is enabled, Wireshark will keep state for all request/response pairs to remember which filehandles are acceessed across the entire request/response pair. Then if we filter on

and that would match packet 40 in the example, this option would make the filter also match packet 39 since that was the request associated to the response in 40.
This preference makes the following filters apply across the full request/response pair instead of individual packets 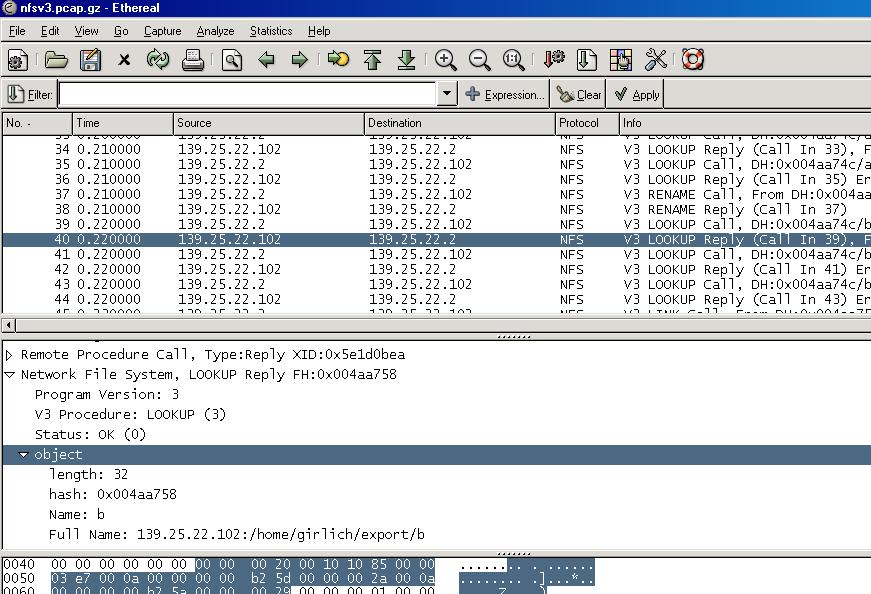 Load this example capture and try filtering for

when all the preferences are enabled and you will see how it works.