IEEE 802.15.4 is currently used as a medium for a wide variety of network protocols, including ZigBee, 6lowPAN and TinyOS.

In March 2005, an extension to the IEEE 802.15.4 specification, IEEE 802.15.4a was released, specifying two additional optional PHYs with improved precision in ranging and locating. 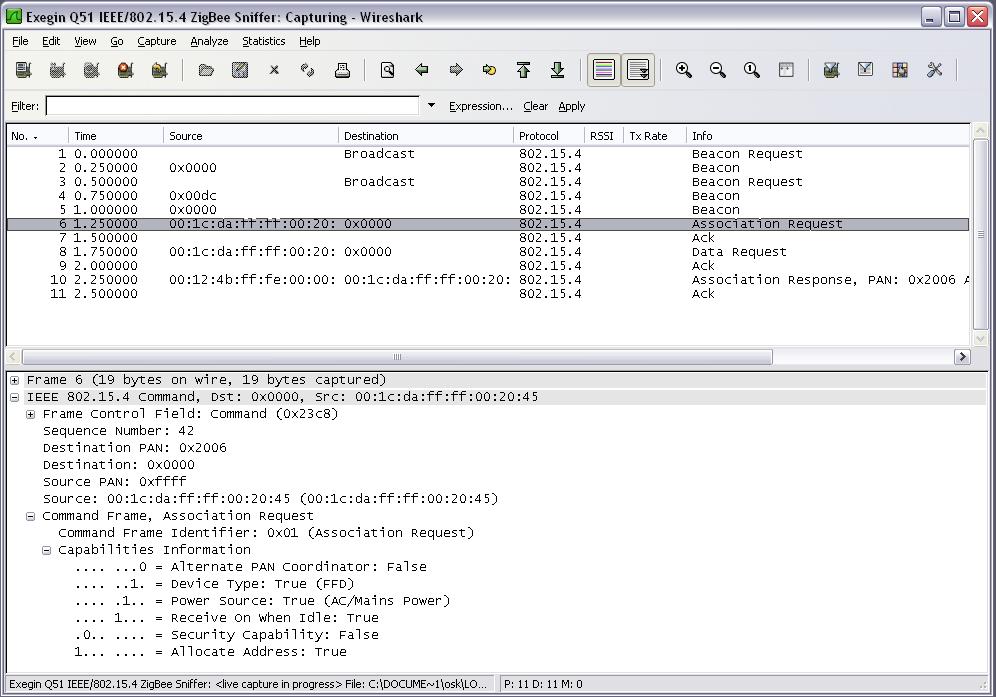 The IEEE 802.15.4 dissector is fully functional, including security (CCM decryption). This is not to be confused with ZigBee NWK and APS security, which is handled by other dissectors.

What capture hardware is being used?

It's an Exegin Q51 IEEE/802.15.4 ZigBee Transceiver, which captures and forwards radio traffic over a TCP/IP connection. Exegin's plugins for 802.15.4, 6LoWPAN, ZigBee 2006, ZigBee PRO, and the ZigBee Cluster Library have been donated to the Wireshark project and could be used with any capture device. Interested parties (such as dongle vendors) are encouraged to write a supportive interface.

There is also an IEEE 802.15.4/ZigBee USB dongle available from ubisys with special firmware. The firmware performs ZEPv2 encapsulation over RNDIS.

TI also has software and firmware for some devices to do the capture. The software can be configured to relay the traffic via UDP to a loopback and there is an available perl script at http://e2e.ti.com/support/wireless_connectivity/f/155/t/56980 to convert from the TI capture format to the dissector expected one.

The nRF 802.15.4 sniffer provides an extcap interface to start capturing directly from Wireshark. It provides out-of-band meta-data for Channel, RSSI and LQI for every packet using the IEEE 802.15.4 TAP link type.

The Exegin Q59 USB Dual Band Dongle together with custom firmware and software is capable of capturing packets up to 2047 bytes introduced with IEEE 802.15.4g SUN PHYs. Sniffing of SUN PHY implementations based on JupiterMesh TSCH and Wi-SUN networks are supported. The captured packets and meta-data are output using the IEEE 802.15.4 TAP link type in a libpcap or pcapng stream. The output stream may be directed to a file, fifo, or TCP port. Exegin also provides a scalable solution for capturing live data from all the channels specified in channel hopping networks simultaneously.