Wireshark can decrypt WEP and WPA/WPA2 in pre-shared (or personal) mode. WPA/WPA2 enterprise mode decryption works also since Wireshark 2.0, with some limitations.

You can add decryption keys using Wireshark's 802.11 preferences or by using the wireless toolbar. Up to 64 keys are supported.

Go to Edit->Preferences->Protocols->IEEE 802.11. You should see a window that looks like this: 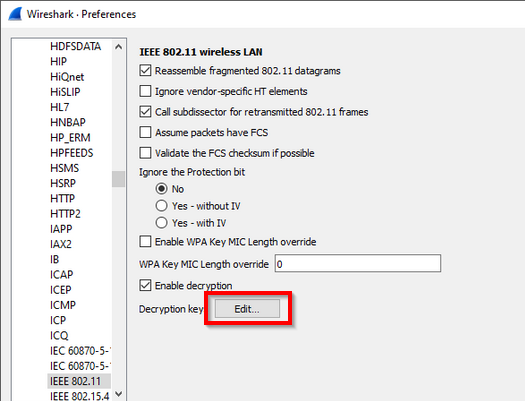 Click on the "Edit…" button next to "Decryption Keys" to add keys. You should see a window that looks like this: 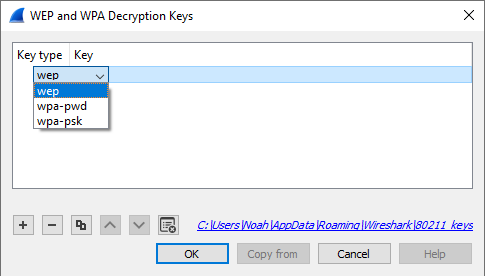 When you click the + button to add a new key, there are three key types you can choose from: wep, wpa-pwd, and wpa-psk:

You can optionally omit the colon and SSID, and Wireshark will try to decrypt packets using the last-seen SSID. This may not work for captures taken in busy environments, since the last-seen SSID may not be correct. 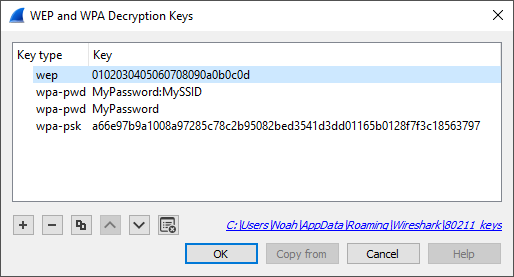 If you are using the Windows version of Wireshark and you have an AirPcap adapter you can add decryption keys using the wireless toolbar. If the toolbar isn't visible, you can show it by selecting View->Wireless Toolbar. Click on the Decryption Keys… button on the toolbar:

This will open the decryption key managment window. As shown in the window you can select between three decryption modes: None, Wireshark, and Driver: 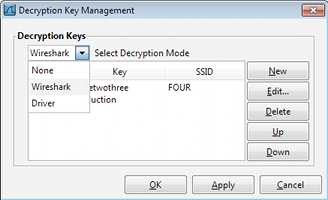 Selecting None disables decryption. Selecting Wireshark uses Wireshark's built-in decryption features. Driver will pass the keys on to the AirPcap adapter so that 802.11 traffic is decrypted before it's passed on to Wireshark. Driver mode only supports WEP keys.

Along with decryption keys there are other preference settings that affect decryption.

The WPA passphrase and SSID preferences let you encode non-printable or otherwise troublesome characters using URI-style percent escapes, e.g. %20 for a space. As a result you have to escape the percent characters themselves using %25.

WPA and WPA2 use keys derived from an EAPOL handshake, which occurs when a machine joins a Wi-Fi network, to encrypt traffic. Unless all four handshake packets are present for the session you're trying to decrypt, Wireshark won't be able to decrypt the traffic. You can use the display filter eapol to locate EAPOL packets in your capture.

WPA and WPA2 use individual keys for each device. Older versions of Wireshark may only be able to use the most recently calculated session key to decrypt all packets. Therefore, when several devices have attached to the network while the trace was running, the packet overview shows all packets decoded, but in the detailed packet view, only packets of the last device that activated ciphering are properly deciphered. Newer Wireshark versions are able to handle up to 256 associations and should be able to decode any packets all the time. Nevertheless, decoding can still fail if there are too many associations. Filtering out only the relevant packets (e.g. with "wlan.addr") and saving into a new file should get decryption working in all cases. Wireshark only frees used associations when editing keys or when it's closed. So you may try that when decoding fails for unknown reasons. This also allows you to decode files without any eapol packets in it, as long as Wireshark did see the eapol packets for this communication in another capture after the last start and key edit. If decoding suddenly stops working make sure the needed eapol packetes are still in it.

As long as you can somehow extract the PMK from either the client or the Radius Server and configure the key (as PSK) all supported Wireshark versions will decode the traffic just fine up to the first eapol rekey.

Eapol rekey is often enabled for WPA/WPA2 enterprise and will change the used encryption key similar to the procedure for the initial connect, but it can also be configured and used for pre-shared (personal) mode. Wireshark 2.0 (v1.99.6rc0-454-g1439eb6 or newer) is needed if you want decode packets after a rekey.