GSM is a technology for digital wireless telecommunications, represented by a decent number of specifications. Parts of GSM are based on the fixed-line ISDN technology.

The 3rd Generation Partnership Project (3GPP) maintains the GSM standards; most of the specifications for GSM can now be found at the 3GPP Web site.

Incidentally, the initial abbreviation of GSM was "Groupe Spécial Mobile" (Special Mobile Group). The acronym was preserved but a new, English meaning was given to it later, once the potential of the technology was understood.

The GSM protocol family consists of many protocols, and other protocols are conveyed on top of these. 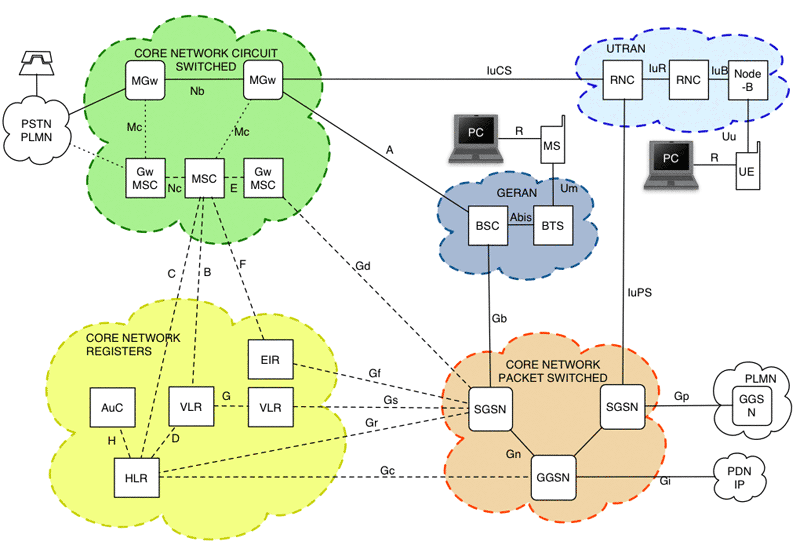 Controls Mobile Calls. Is in charge of the radio part. In Release 4 of UMTS, this function is split between a Media Gateway (MGw), which handles the bearer (user) traffic (voice, video, etc.) and an MSC Server, which handles the call control. In GSM and earlier releases of UMTS, the base stations communicate with the MSC, which handles both bearer traffic and call control. A Gateway MSC, or Gw MSC (or GMSC) connects to other networks, such as the PSTN or other mobile networks.

Transit Exchange for calls to be routed either between MSCs or towards other networks.

Keeps track of (a part of) the subscribers of the network and how they can use it. Each user is identified by the IMSI, a 15 digit number (Not the one printed in the SIM that is the ICCID); the first three digits are the country identifier (eg. 222 is Italy), the following two digits are the network (in Italy 01 is TIM, 02 is Vodafone), and the rest is the unique number of the SIM. The HLR contains such data as the current roaming, redirection, and special services settings.

Keeps track of Mobile Phones; it could be used to find stolen equipment if operators were forced to use it (they make plenty of money out of calls made from stolen phones so they won't do it unless forced).

Maintains information regarding the cryptographic keys that are in the SIM (Subscriber Information Module). It authenticates the user in the network.

Keeps a Database of Numbers owned and exported by the network (Number Portability).

Maintains and controls the radio part of the network.

The machine with the antennae. A slave of the BSC from which it takes its configuration.

The phone or modem. "PC" refers to a personal computer with the MS as a modem.

The phone or modem. "PC" refers to a personal computer with the UE as a modem.

A gateway between the SGSNs and the other networks

Interface between the MSC and the BSC. Control Plane Protocols:

Interface between the BTS and the BSC:

Interface between an MSC and a VLR.

Interface between an MSC and a HLR.

Interface between a VLR and a HLR.

Interface between two MSCs or TSCs.

Interface between an MSC and an EIR.

Interface Between an HLR and the AuC

Interface between an MS and a BTS.

UMTS uses packet networks, ATM and/or IP, instead of TDM to transport user data (Voice, Video, etc.) So two sets of protocols are used - Control Plane Protocols (that control the calls) and user plane protocols (that carry the user's data).

Interface between two MSCs or TSCs.

Interface between an MSC or TSC and its controlled MGws.

Interface between the Circuit Switched Core Network (via MGw) and the UMTS Radio Network (UTRAN, via Anchor RNC).

Interface between the two RNCs (used for switching calls that had been handed over from one RNC to the other).

Interface between an RNC and a Node-B.

Interface between the UTRAN (RNC) and the Packet Switched Core Network (SGSN) .

The interface between GGSN and external packet data networks such as the Internet.

This is an optional interface for PS/CS interoperability. Using the Gs interface it is possible to perform combined GPRS/IMSI attaches, combined location updates and paging the subscriber using PS facilities. The protocol is BSSAP+ specified in 3GPP TS 29.016 ( supported by Wireshark on ssn 98)

The Ge is an interface between gprsSSF entity in SGSN and gsmSCF entity in SCP. It is used to handle CAMEL dialogues using the CAP protocol (supported by Wireshark).