The exec protocol (sometimes known as rexec) is used to run a program on a remote server as if it was being run on the local machine. This is acomplished by redirecting standard in/out and standard error through the connection. The server running exec receives a connection from a client by opening a socket. The server waits for four null terminated strings (that may come in 2, 3 or 4 packets):

After these strings have been received, control is passed to the program specified in the command to run on server string.

The exec protocol was first added to 4.2BSD and was later determined to be insecure. The main security issue for the protocol is that it does not encrypt data, which allows usernames and passwords to be viewed with a packet sniffer. 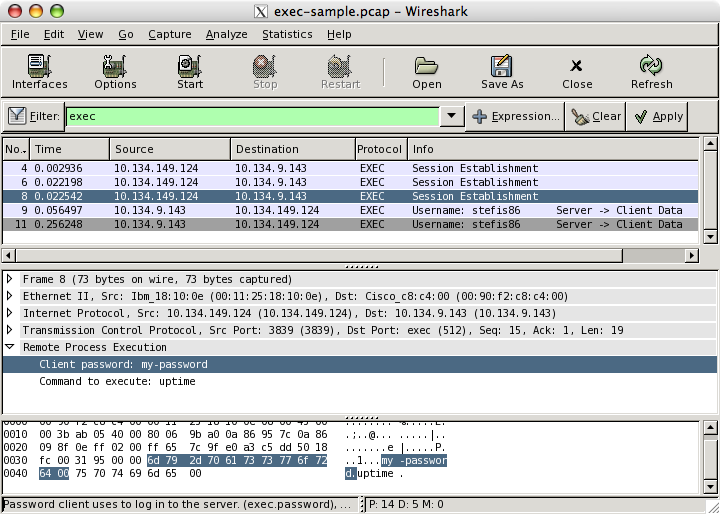 The exec dissector is fully functional. In some instances, such as when packets are lost, the state of the connection cannot be tracked properly. If the state is lost, the fields may show in the wrong order (for example, the password showing up as the username field).

The exec protocol has two preference settings in Wireshark:

Show only the exec traffic:

You cannot directly filter the exec protocol while capturing. However, if you know the TCP port used (see above), you can filter on that one.

Capture only the exec traffic over the default port (512):