DHCP is a client/server protocol used to dynamically assign IP-address parameters (and other things) to a DHCP client. It is implemented as an option of BOOTP.

Some operating systems (including Windows 98 and later and Mac OS 8.5 and later) use APIPA to locally assign an IP-address if no DHCP server is available. 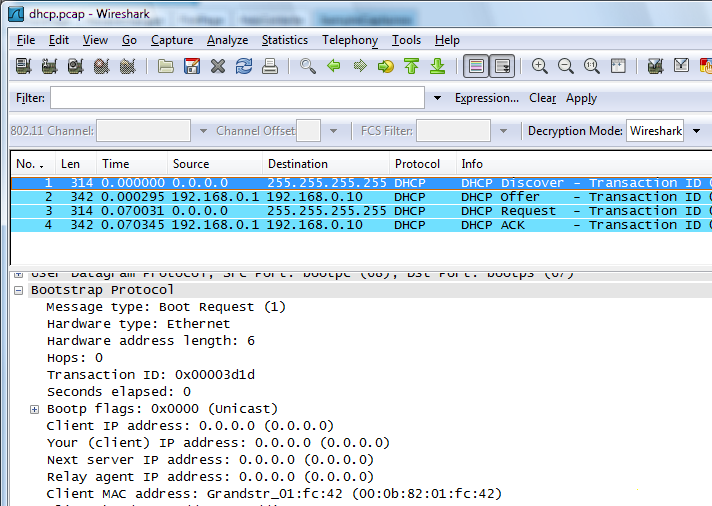 The DHCP dissector is fully functional.

Most versions of Microsoft Windows improperly encode the secs field on the wire as little-endian. Wireshark will attempt to detect this and display the message "little endian bug?" in the packet detail. In the example below, the secs value 0x0e00 (3584, or nearly an hour) was sent by a Windows XP client, even though the client hadn't been retrying that long. Interpreting the value as 0x000e (14) matches the time elapsed since the first request (packet #3).

As DHCP is implemented as an option of BOOTP, you can only filter on BOOTP messages. A complete list of BOOTP display filter fields can be found in the display filter reference

Show only the BOOTP based traffic:

As DHCP is implemented as an option of BOOTP, you can only filter on BOOTP messages. You cannot directly filter BOOTP protocols while capturing if they are going to or from arbitrary ports. However, BOOTP traffic normally goes to or from ports 67 and 68, and traffic to and from those ports is normally BOOTP traffic, so you can filter on those port numbers.

Capture only traffic to and from ports 67 and 68:

What about little endian bug ? There is some errors in "seconds elasped" field, but nothing about an issue about this. (I've got this error on DHCPInform request, the request is loaded twice, with 3 seconds intervals and one of the two request contains this error) - CortoGueguen

If you think there's a bug in Wireshark's DHCP dissector, either file the bug on the Wireshark Bugzilla or send mail to the wireshark-users mailing list; this is not the place for reporting Wireshark bugs. -Guy Harris

I think CortoGueguen might be referring to an error message that Wireshark displays. I've added an explanation along with a screenshot. - GeraldCombs