The Directory Access Protocol (DAP) is used by Directory User Agemts (DUAs) to retrieve information from a Directory System Agent (DSA). The information in the DSA is stored in entries in a hierarchical form, with each entry containing attributes that are specific to one of more object classes. DAP allows a client to list, search, add, delete, modify and rename the entries within the DSA.

If a DSA does not hold the information being searched for, it may chain the DAP operation to another DSA using DSP.

The DAP dissector is fully functional, including support for signed operations.

From the source file packet-dap.c (fodder for Wiki searches)

There is a single preference field for the DAP dissector, the DAP TCP Port - the port to which DAP associations are made. The default value is 102.

NOTE: moved in 31205360 : "Have TPKT support a TCP port range preference instead of having "subdissectors?" register their own." 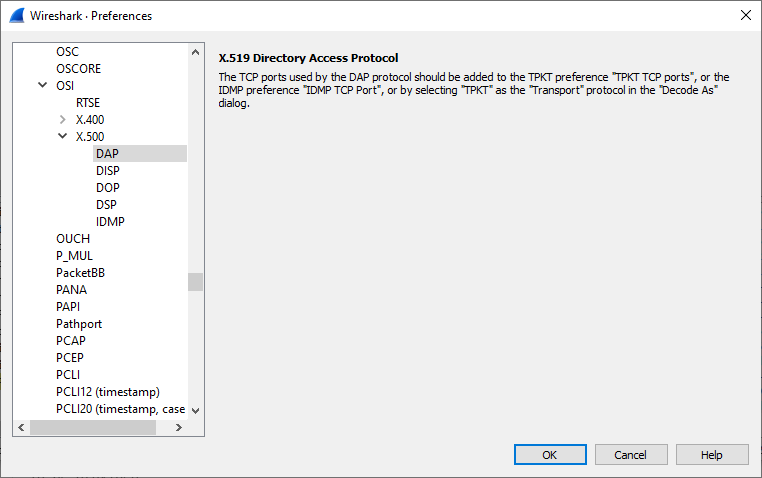 Show only the DAP based traffic:

You cannot directly filter DAP protocols while capturing. However, if you know the TCP port used (see above), you can filter on that one.

Capture only the DAP traffic over a non-standard port (19970):