Wireshark uses the same syntax for capture filters as tcpdump, WinDump, Analyzer, and any other program that uses the libpcap/WinPcap library.

If you need a capture filter for a specific protocol, have a look for it at the ProtocolReference.

Capture filter is not a display filter

Capture filters are set before starting a packet capture and cannot be modified during the capture. Display filters on the other hand do not have this limitation and you can change them on the fly.

In the main window, one can find the capture filter just above the interfaces list and in the interfaces dialog. The display filter can be changed above the packet list as can be seen in this picture: 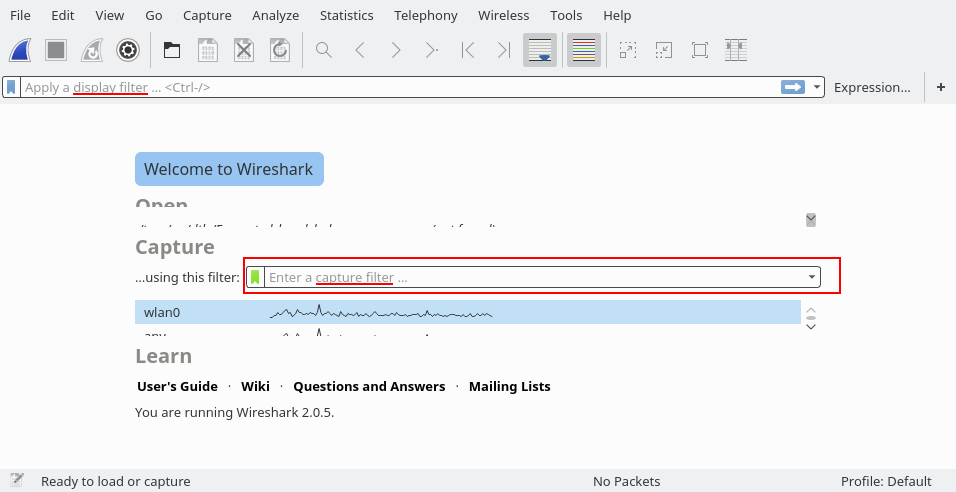 Capture traffic to or from a range of IP addresses:

Capture traffic from a range of IP addresses:

Capture traffic to a range of IP addresses:

Capture non-HTTP and non-SMTP traffic on your server (both are equivalent):

Capture except all ARP and DNS traffic:

Capture traffic within a range of ports

Capture only IPv4 traffic - the shortest filter, but sometimes very useful to get rid of lower layer protocols like ARP and STP:

Capture only unicast traffic - useful to get rid of noise on the network if you only want to see traffic to and from your machine, not, for example, broadcast and multicast announcements:

Capture IPv6 "all nodes" (router and neighbor advertisement) traffic. Can be used to find rogue RAs:

Blaster and Welchia are RPC worms. (Does anyone have better links, i.e. ones that describe or show the actual payload?)

The filter looks for an icmp echo request that is 92 bytes long and has an icmp payload that begins with 4 bytes of A's (hex). It is the signature of the welchia worm just before it tries to compromise a system.

Many worms try to spread by contacting other hosts on ports 135, 445, or 1433. This filter is independent of the specific worm instead it looks for SYN packets originating from a local network on those specific ports. Please change the network filter to reflect your own network.

Wireshark tries to determine if it's running remotely (e.g. via SSH or Remote Desktop), and if so sets a default capture filter that should block out the remote session traffic. It does this by checking environment variables in the following order:

(addr_family will either be ip or ip6)

DisplayFilters: more info on filters while displaying, not while capturing

be a better filter? - Gerald Combs

Q: What is a good filter for just capturing SIP and RTP packets?

A: On most systems, for SIP traffic to the standard SIP port 5060,

should capture TCP traffic to and from that port,

should capture UDP traffic to and from that port, and

In most cases RTP port numbers are dynamically assigned. You can use something like the following which limits the capture to UDP, even source and destination ports, a valid RTP version, and small packets. It will capture any non-RTP traffic that happens to match the filter (such as DNS) but it will capture all RTP packets in many environments.

Capture all traffic originating (source) in the IP range 192.168.XXX.XXX: