ANSI C12.22 (also known as IEEE Std 1703) is an application layer protocol designed for use on electric utility meter networks of the Smart Grid. Its official title is Protocol Specification for Interfacing to Data Communication Networks but this title is somewhat more generic than the protocol. The protocol is used to transport ANSI C12.19 tables which are metering specific data structures. The ANSI C12.22/IEEE 1703 protocol define the framework for transporting ANSI C12.22/IEEE 1703 Advanced Metering Infrastructure (AMI) Application Layer Messages on an IP network on the Smart Grid.

The first two protocols in this series were ANSI C12.18 and ANSI C12.19 which are, respectively, an infrared close range point-to-point telephone communications protocol and standardized data structures for electric utility meters (watthour meters). Virtually all electronic utility watthour meters produced for the North American market implement these standards. ANSI C12.18 was first published in 1996 and revised in 2006. ANSI C12.19/IEEE 1377 was originally published in 1997. The latest version of ANSI C12.19 is IEEE Std 1377-2012/ANSI C12.19-2012.

ANSI C12.21 was an adaptation of the simple ANSI C12.18 optical protocol and was intended for use over dial-up modems. It was first published in 1999 and revised in 2006. 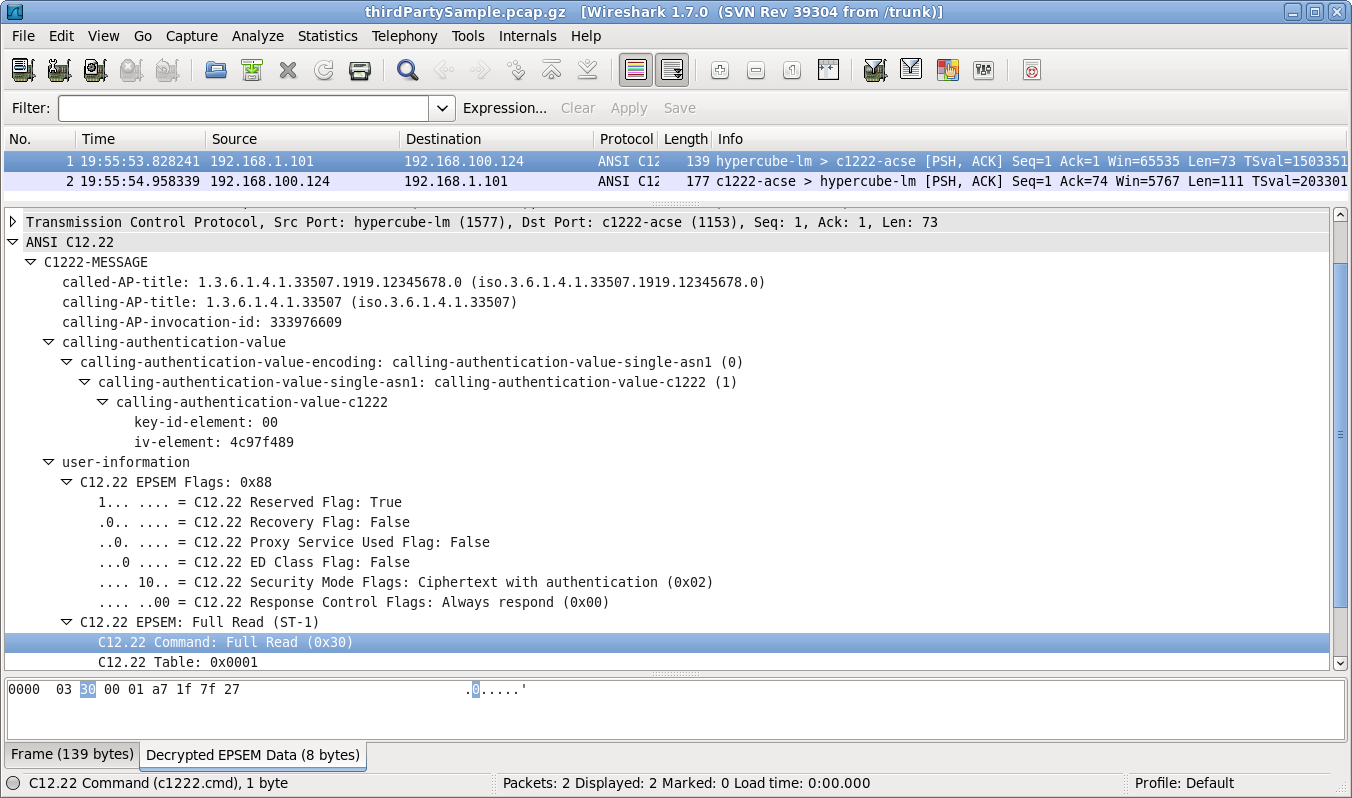 The C12.22 dissector has been included in the main code since version 1.8. The dissector implements all three C12.22 security modes (none, Authentication only and Ciphertext with Authentication) and TCP packet reassembly.

The following preference settings are associated with the C12.22 dissector:

The decryption table is a list of cryptographic keys used with a specific instance of the C12.22 protocol. The table search mechanism is very simple: the dissector searches linearly from the top of the table to the bottom until it finds a matching key ID. This means that the table may contain multiple entries for a particular key ID. That is, one might have multiple different keys all labelled as key 0 within the table but the dissector will only use the first one listed. This is done as a convenience so that different captures can be analyzed simply by moving the relevant key(s) up to the top of the list. As per the protocol specification the key ID is a single byte and the keys are each sixteen bytes long. Both are specified in hexadecimal notation in this dissector.

You cannot directly filter C12.22 protocols while capturing. However, if you know the TCP port used (see above), you can filter on that one.